This one is a bit of thought-provoking fun; an applied content science experiment. The question: can you apply primarily digital content concepts in day-to-day physical life?  I tried to get an uninitiated crowd to help me curate some content in near real-time, by setting up a taxonomy and system of “physical likes”.  To put it another way, I crowd-sourced my way through DJing a house party.

It turns out you can use content concepts directly in real life, but people might call the cops.

I present you a case study in traditional form:

Part 2: How DJing A House Party Taught Me How My Brain Works

I have a sort of fetish for my work. I love it. My network will have noticed that I get caught up in the whole international whirlwind of it. But, Noz loves to party too. In one of my various previous lives I used to DJ house parties, private functions, and the occasional club that could be tricked into having me. I haven’t done so in years, and never in Spain, so when I landed a sweet gig last week at a penthouse pad DJing for a mixed-age (mainly 20s-40s) crowd, I had a bit of a problem.

It was a highly international crowd of about 100 strong, from at least some 15 countries – NATO and UN staff, international students and au pairs, and locals of Valencia, Spain (where I live). They had come for a BBQ, one in a series of about 5 so far this year, but I was supposed to get the dance-floor really moving for the first time.  What content should I deliver? I’d only worked in Toronto, Canada, as a kid, DJing for other kids my age, over a decade ago!

The business goal: be ready in 24 hours and keep ‘em rocking for the whole BBQ.

I decided to apply my professional methodology to this problem. After all, a DJ is really just a (digital) content curation and delivery system.  What would I tell a client to do if they were in a pinch like this? Start with the basics:

What do you have and what good is it?  This was the easy bit.

How do you filter all that and deliver the right “stories” to a mixed, largely unknown audience?  Well, if you’ve got no metrics (and no time) you’ve got to:

I needed a framework to work against to build these stories, so I built a genre taxonomy the day before. After much thought, I eventually settled on this:

I took my taxonomy and put it on a large-format card in a sort of structured “tag-cloud”.

Light and happy genres on the left; dark and aggressive music on the right.  More electronic music across the bottom. “Don’t care” was in the middle (In Spanish: “Me da igual”): 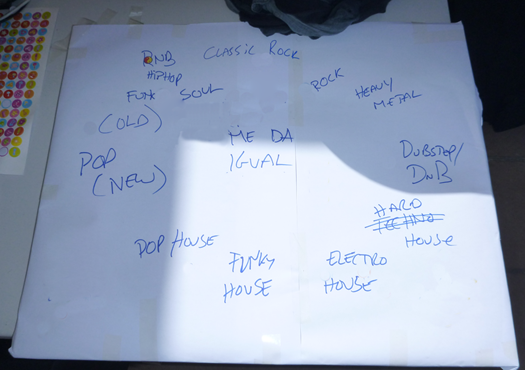 Please no freaking out at me about this taxonomy. I’m sure yours would be different!

A DJ (or at least a good one, in my opinion) thinks this way. You have taxonomy in your head, and you build up content sequences – little stories – from your assets, and you see how they go down. Feedback is as fast (faster, even) than it is online, so you can dynamically adapt, but you’ve got to have a framework to work against. Be too fast and ready to react outside of your framework, and things fall apart (which we’ll see later in Part two: “Big-a** failures” when things weren’t going so well…).

I needed a system of “likes” – something that would allow people to give me metrics against the taxonomy, rather than pelting random requests at me (which is death, as we’ll see in Part 2).

I grabbed a few sheets of little kid’s stickers from a corner store; the kind that kindergarten teachers would put on good finger-paintings. I thought these would make great analogue “like” buttons, and people could like the genres they wanted to hear. 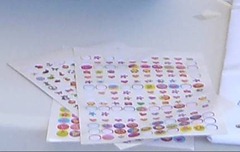 I then needed some minimalist, multi-lingual help content that would allow zero ramp-up time and prevent calls to the support desk (me).

I wrote a sentence once in English: “Take a sticker and put it near your genre” and then crowd-sourced translations from the early BBQ arrivals into the 3 next most popular languages of the target audience (Spanish, German, & French): 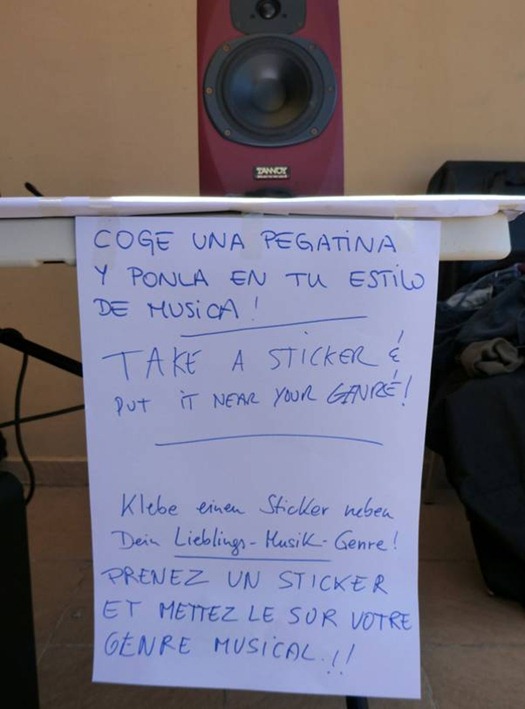 The shortest user manual I’ve ever worked on. Yes, would have been better to say “…put it near your preferred genre”, but I was working to keep it short. The other languages translate long and I had limited page real-estate, crowd-sourced content and limited resource (paper) for re-writes. 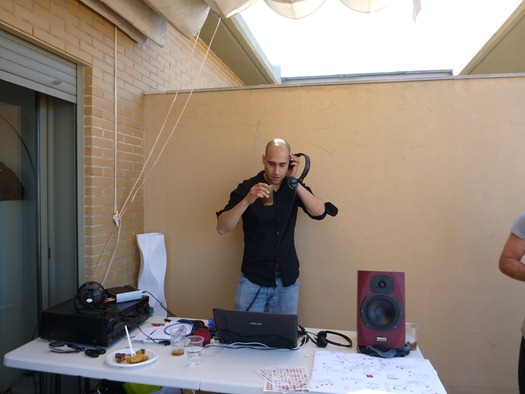 Here I am with the final set-up (user manual got cropped out on the right unfortunately).
(I’ll actually talk software and hardware as a post-script for the music tech fans.)

After only a few minutes people started voting for their genres.  The table attracted attention and the sign worked.

I had left out my pen on the table, and without meaning to be, my taxonomy suddenly became an Amazon.com-like taxonomy/folksonomy.  People actually added the genres “reggae”, “electro latino”, “indie rock” and “world music”, before I took the pen away to avoid overload. 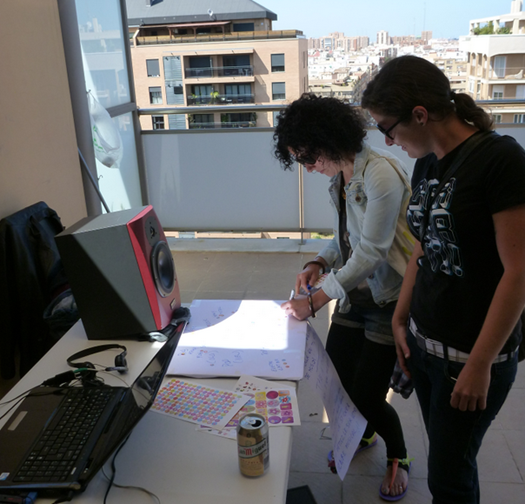 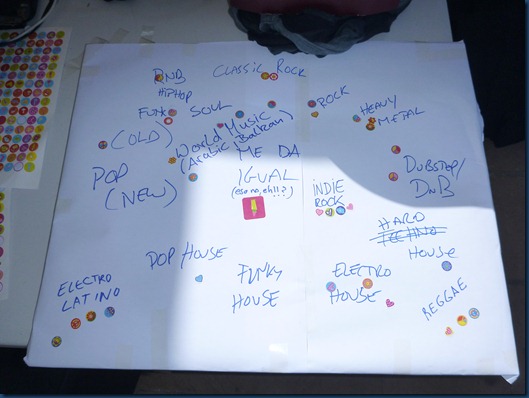 What blew my mind was not that they voted, but how enthusiastically they engaged with the process. They LOVED it.  Several were actually taking pictures of the system and themselves using it (presumably for Facebook purposes). 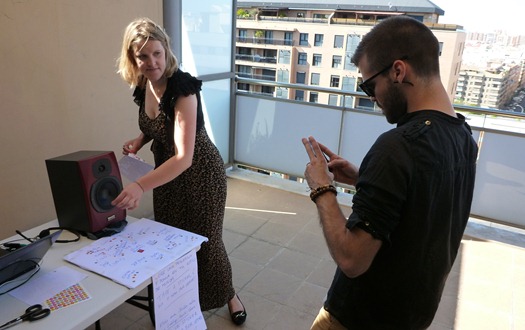 The users, sorry, the guests engaged so completely with the like system that it took on a life of its own – it went viral!  People started to “like” themselves and each other – on the head: 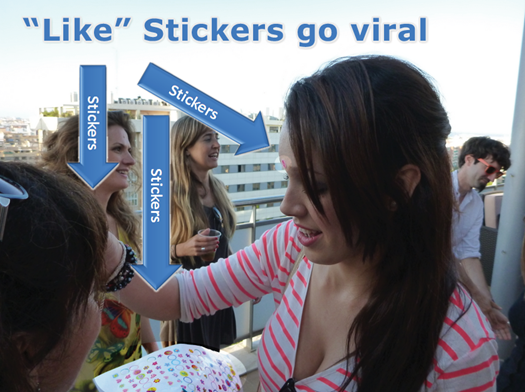 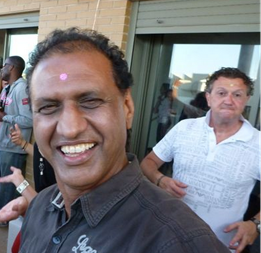 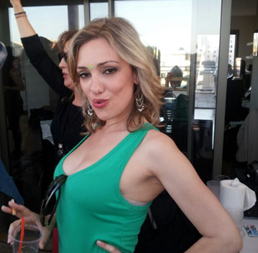 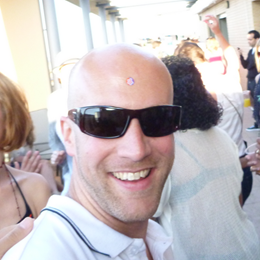 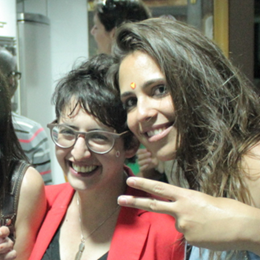 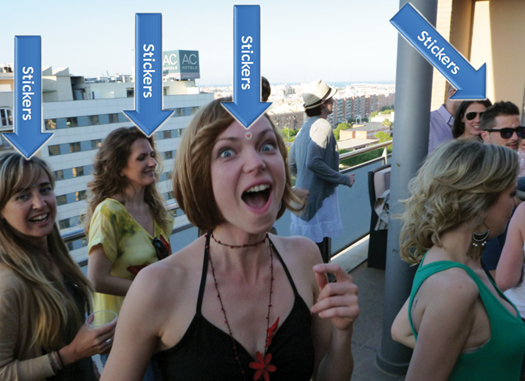 So within an hour I had metrics from which I could make strategic decisions about how to present my content assets.  This data would also guide future spending on new content acquisition.

So, most important, did taxonomy-driven crowd-sourcing rock the house?  This video condenses my view down to 80 seconds:

My point of view throughout the event condensed to 80 seconds.

I even had two solicitations for new projects – an opening of a lounge bar downtown and a wedding.

The Moral of the Story 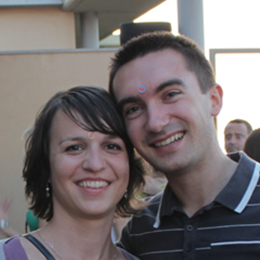 The real point of this post is to demonstrate that content concepts work best when they are natural to us. People today have internalised the ideas of social voting and ranking (“likes”) and crowd sourcing. Still, this probably would have worked 20 years ago, because these concepts are intuitively democratic and social.

In part two I look at how taxonomy is natural reflections of our basic models of thought and memory, but for now I’ll just say:

Many technologies have achieved success by removing barriers to entry – they make technology more like working without technology. Wii, Xbox Kinect; Bluetooth earpieces; swipe, pinch and shake on your mobile phone; are all trying to make interfaces disappear and just work with your body and natural instincts.

Augmented reality; wearable tech and more will follow this trend in years to come to make sure that technology gets more and more seamlessly integrated into our lives to the point where we don’t know it’s there.  For me this party was the content equivalent.

In Part 2 we’ll look at some wider conclusions and Content Strategy implications of this little story that lead us to the nature of our brains, Spotify, Pandora, and the Almighty Taxonomists: Amazon.com.

Part 2: How DJing A House Party Taught Me How My Brain Works

Have You Done Real-World CS?

Has anyone else applied their work concepts to daily life? I’d love to hear other stories.

Just for fun, here’s my taxonomy again with linked song examples of each!

Part 2: Applied Content Strategy: How DJing a House Party Taught Me How My Brain Works [NF0]